It is one of the most monumental sites in the lowlands of Guatemala and one of the oldest sites in Mesoamerica. This site was founded in the Middle Preclassic. Some centuries later, it became the capital of the region and one of the places where the main characteristics of the Mayan Civilization, still alive during the following 10 centuries, originated.

The city has three large sectors, connected by a network of roads, which also allow communication with peripheral groups. Although other contemporary cities in the region are known, none of them can be compared with them. It has 35 complexes of Triadic Pattern, Complexes of Astronomical Commemoration, Acropolis, roads, hydraulic systems, monumental buildings, sculptures and masks. The sets include La Danta, El Tigre, Los Monos and the Great Acropolis.

Through a network of roads, the civic-ceremonial center of El Mirador is connected to the suburbs where the Sacalero, La Muerta, Los Faisanes and Los Cruces groups are located.

It was built around 150 a.C., on the west wall you can see the high quality of materials and building systems developed more than 2000 years ago. A substructure built around 400 a.C. was also decorated with masks and red, cream and black stucco panels.

The masks of this building show the metamorphosis of a jaguar-solar deity throughout its movement from East to West. The outgoing figurehead has half of its skeletal face and the other half is in a corporeal form. It has been suggested that the panels represent a ruler or the royal lineage. The earmuffs are shaped like a “jaguar claw” with symbols of fire. It is believed that this building is a dedicatory monument or the tomb of a member of the ruling lineage. 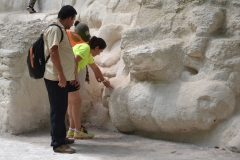 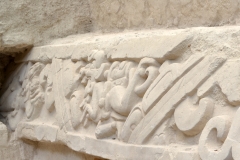 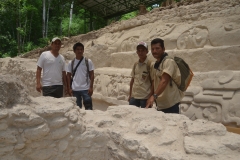 It is the largest building built in the entire Maya Area. During the Late Preclassic, the ancient inhabitants took advantage of a natural hill for its construction and then connected it to the city by a 600 m long road, which overcomes a flood area. The large basements of the complex covered an area of 300 m long and 280 m wide and reached 22 m in height. The Danta reaches a total height of 77 m in height from the base of the complex, allowing a magnificent view of the Mayan Jungle.

The complex includes several buildings located on two stepped platforms. The Acropolis of La Danta Acropolis is the most important of the set and its location within the settlement is associated with the departure of the god Kinich, surely it was a prominent destination of ceremonial marches. 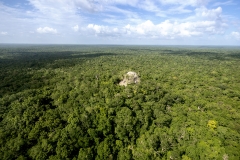 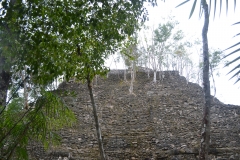 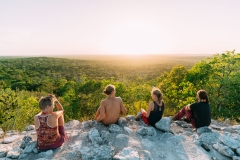